It is with great pride that I write these words to introduce Volume 4 Number 2 of the Trento Student Law Review. It is satisfaction for a job well done, gratitude for a cohesive and prepared team, and for articles that are - each in its own area of legal scholarship - of great actuality.

Hence, the Trento Student Law Review aspires, once again, to make a modest contribution to the academic debate, bringing issues approached with a critical perspective to the attention of our readers.

Opening this volume is an article that focuses on one of the current geopolitical hotspots - the Taiwan Strait - and the legislative tools employed by the People's Republic of China in the fight over Taiwanese independence and sovereignty. The one China principle and its legal consequences, domestically and abroad: the disputed control over Taiwan and the anti-secession law. Much Ado about Nothing? investigates international law principles of state sovereignty and both the debates, public and academic, around the existence of the Republic of China (Taiwan).

In The encryption paradox: fostering security by threatening security the focus will be on the tension between encryption as a tool to safeguard free information and the right to privacy in digital communications on the one hand, and public safety and national security requirements on the other. The author will examine how other fields are impacted by encryption: possible balancing of interests and viable solutions to resolve the contrast are presented.

Another source of friction, this time between cornerstone principles of criminal law and police investigative techniques, is explored in the article Sting operations and entrapment defense in corruption behaviors. A systematic analysis between Italy, Europe, and the United States. This article develops a transnational comparison of the law enforcement activity of the agent provocateur - characteristically a U.S. phenomenon - and the Italian criminal justice system, while the relevant principles of the European Charter of Human Rights are enriched by a historical and in-depth jurisprudential analysis of the subject.

Also in the field of criminal law, approaching different legal systems from a comparative perspective, is another balancing of interests. Christian sermons and the law of defamation in Cameroon: A common law approach sets out to investigate freedom of speech and religious freedom when they come into tension with the individual right not to harm one's dignity or reputation. Cameroonian criminal law protecting honor and common law judicial precedents are read through a comparative prism.

What better time to reflect on the notion and tools of transitional justice than at a time when a divisive and wrenching war between two nations and two peoples is shedding blood on the borders of Europe? Thus in Are Top-down Approaches of Transitional Justice Enough to Deliver Justice? a perspective different from the traditional one on transitional justice is depicted: one where transition is promoted from below.

This is how our editorial operation engages with the legal literature panorama, while at the same time allowing us young jurists to hone skills in editing legal texts, legal texts which deal with frontier issues. A combination that allows us to individually challenge our skills and attention to detail, directly shaping the continued growth and evolution of the editorial work of this Law Review.

In conclusion, we owe a mention of gratitude to Professor Fulvio Cortese, to whom we express our high regard and admiration for his service as Dean, but also for the constant help and support he has always given to this publication during his tenure. We would also like to wish every success to Professor Paolo Carta, who took up the baton from Professor Cortese at the helm of our Law School: ad maiora!

Finally, I would like to thank my Vice Editor-in-Chief, Emma Castellin, for patiently supporting me in this round of proceedings, and to the Trento Student Law Review team, without whose vital work this volume would not have been possible. 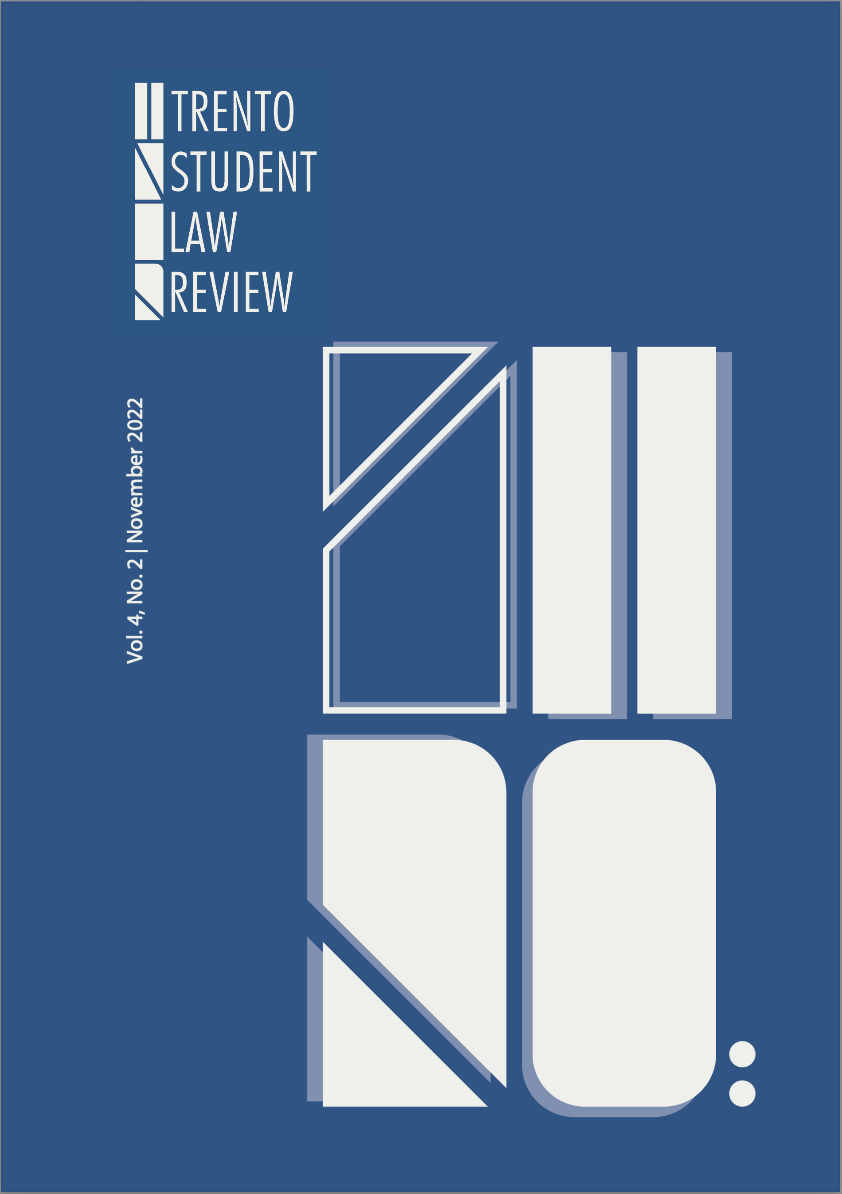 This work is licensed under a Creative Commons Attribution-NonCommercial-ShareAlike 4.0 International License.

Most read articles by the same author(s)

Powered by OJS, engineered and maintained by 4Science.